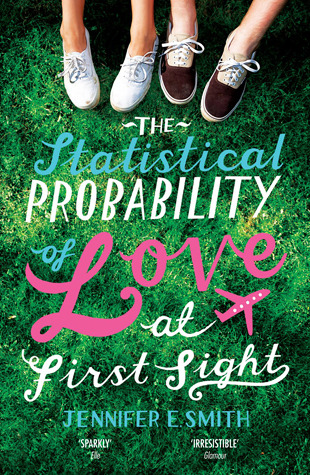 A few weeks ago, all I wanted to read was a nice, cute, straight forward YA love story. Do you ever get that urge? The cover of Jennifer E Smith’s Statistical Probability of Love at First Sight seemed to promise just what I wanted. At a slim 215 pages, it was a whirlwind affair: here’s what I thought.

Hadley’s never been to London before. She’s also never been a bridesmaid. You’d think she would be excited? You’d be wrong. This isn’t just any wedding. Hadley’s Dad is getting remarried, to a woman Hadley’s never met. Hadley hasn’t even seen much of her Dad since he left two years ago for a job and then never came home.

So, no. This isn’t exactly a dream come true for Hadley. Perhaps the only thing that convinced her to even get on the plane was the boy in the seat beside her. Because what are the chances that the person next to you is a cute British guy who’s interesting and funny and her age too? Oliver’s all that and more: and if Hadley’s not careful, she might end up not hating everything about this day after all.

Yep. this was exactly what I hoped it would be: a meet cute story about two people having a potentially very bad day. It was also more than that, and less than that.

Hadley’s a fairly standard teenager – and I use that in both a positive and negative sense. She’s smart, snarky, sweet, stubborn and self-centered. Yep, all the S’s. Her parents divorced a couple of years ago, after Hadley’s Dad took a teaching post at an English university and fell in love with more than the position. Her Mum (because I’m stubborn about my Australian spelling, darn it) actually handled it better than Hadley; who felt like her Dad had simply abandoned them both.

The incredibly strained dynamic between Hadley and her father was actually the most intriguing aspect of the book for me – more so even than the burgeoning romance. Divorce is never easy, for the people divorcing or the kids caught in the storm. Hadley seemed so young, and so vulnerable, blaming her Dad for ruining everything. As a child of divorce myself, I can understand the temptation to assign blame and not try to understand. I also get that it’s hard to take a step back and gain some perspective when you’re hurt. But this was where I ended up losing some sympathy for Hadley. She refused to come out of the bubble of her own pain, even to let herself and her parents heal.

But this story is also a love story. Oliver provides a perfect way for Hadley to gain some much-needed distance from her problems. He’s got some problems of his own – but it takes a little while for Hadley to realise this. In the meantime, he’s just a lovely guy trying to distract Hadley from her fear of flying and parents getting married, by talking about anything and everything he can think of. Over the course of one plane trip and twenty-four hours, we see the beginning of the kind of love story you want to read more about.

I know! It feels like I missed the point of The Statistical Probability of Love at First Sight. Or did I? I think a story like this can look at all sorts of love. And for me, the broken-but-mending family dynamic was the heart of this story. It’s a story well worth the read.

For fans of Sarah Dessen and maybe even Jodi Picoult.