The Maze Runner – by James Dashner 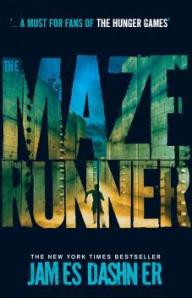 I’m going to start providing summaries at the top of my reviews, for those who want the TL:DR version. Behold:

“Oh my god just tell me what is happening!” – my brain the whole way through The Maze Runner.

I defy you to read this book slowly. I couldn’t wait to get to the end, although that was mainly so I could have some idea of what just happened! It’s a great YA adventure story, aimed squarely at teenage boys, and a good read for anyone who wants an unputdownable tale.

I was infuriated by the first few chapters of The Maze Runner. Without ceremony, you’re dropped straight into a confusing world full of teenage boys, living in a place called The Glade in the middle of, apparently, a giant maze. Would you have questions? Because both I and our protagonist, Thomas, had A LOT of questions. Such as:

– WHAT?
– Where is this place? WHAT is this place?
– Why am I here?
– Who am I? How can it be that I know my name and understand concepts but I know nothing about my history?
– WHY ARE WE IN A GIANT MAZE?
– Seriously, WHAT??

The initial frustration of The Maze Runner is also its strength, as it embraces the understandable rage that both reader and main character feel at being plunged straight into this impossible, unfathomable situation. Thomas wants to know what the HELL is going on, where he is, WHO he is, and most importantly, how to get out of this Maze. And so did I.

At a breakneck pace, James Dashner blithely ignores all this and ploughs straight into a complex plot that presumably leads to some answers. You’re dragged bodily along with Thomas away from your questions and on to more important things, like surviving the night, and trying to figure out why everything that the Gladers thought they knew about this place has changed since you’ve arrived. Not a great way to be popular, as Thomas soon discovers.

I found it hard to separate Thomas’ experience in the Maze from my reading experience of The Maze Runner, which is a pretty big compliment to the author. I lived in the Maze, right there at Thomas’ shoulder (and very impressed with my sudden athleticism) as we tore through the passages.

I recommend this book as long as you’re not too attached to actually finding answers. It reminded me of Lost, the TV show, in the way it brought up mystery after mystery without solving the previous ones. I also yelled at the book. A lot.

Also, there’s a movie coming out soon! And you know you want to be the cool kid who reads the book before the movie, don’cha?

One thought on “The Maze Runner – by James Dashner”