Archive for the tag “Joe Abercrombie”

The Magicians – by Lev Grossman 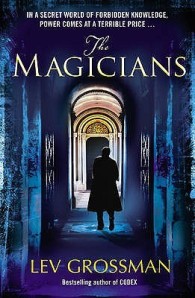 I’m going to start providing summaries at the top of my reviews, for those who want the TL:DR version. Behold:

The Magicians is incredibly ambitious, odd, cynical and sometimes downright infuriating. I LOVED it.

What if Hogwarts (or a place a lot like it) was real? But what if being a magician doesn’t magically solve all your problems, or automatically furnish you with a purpose and direction in life? What if you’re still just you?

This book came to me both highly and widely recommended as an adult’s Harry Potter. People I knew from disparate parts of my life were ranting excitedly at me about how wonderful it was. WOW. Talk about great expectations. END_OF_DOCUMENT_TOKEN_TO_BE_REPLACED

The Blade Itself – by Joe Abercrombie

Two weeks ago I had the opportunity to meet Joe Abercrombie, a British fantasy author who’s best known for his First Law trilogy. He was great, and spoke with so much passion about his fantasy, what inspires him and what he’s trying to do with the genre that I though it was high time I read some of his work! I promptly devoured the first book in his trilogy, The Blade Itself, and this is my take on the novel:

Logen Ninefingers has been a warrior of one sort or another for a long time. He’s shed a lot of blood and dealt more than his share of death. But, he keeps reminding himself: he’s still alive. The main thing Logen’s learnt is that there are no heroes. There are only the dead, and those still hanging on.

Glokta’s still alive too, although some days (okay, most days) he wouldn’t mind if he wasn’t. He’s fallen as far as any man can and clawed his way back. After his career as a champion fighter for the Union was cut short by two years of torture in captivity, he is now one of the Union’s most ruthless Inquisitors, because he simply couldn’t care less about others’ pain. END_OF_DOCUMENT_TOKEN_TO_BE_REPLACED

Like Loading...
Posted in Fantasy, Four and a half Foxes, Review and tagged Book Review, Fantasy, Glokta, Jezal, Joe Abercrombie, Logen, The Blade Itself, The First Law | Leave a comment